To share your memory on the wall of Clinton Nordyke, sign in using one of the following options:

Buss was born to Wayne and Doris (Ridpath) Nordyke, June 15, 1935, in Feterita, KS. He graduated from Hugoton High School and grew up in the United Methodist Church of Hugoton.

Buss and Dixie L. Kagarice were married November 19, 1954, in Hugoton, KS. To this union was a daughter; Sherri and a son; Kelly.

He served in the United States Air Force in 1958.

Buss was a plant manager and retired from Midwest Pipe Coating in Schererville, IN. In 2005 they decided to move back to Hugoton to enjoy family and friends. He loved to do genealogy and work on Model T cars especially of those made in 1926/1927. He also played golf in his free time.

Buss was preceded in death by his parents, a son, Kelly G. Nordyke, sister, Phyllis Duncan and brother, Jim Nordyke.

Robson Funeral Home, of Hugoton is in charge of arrangements.
Read Less

To send flowers to the family or plant a tree in memory of Clinton Darrell "Buss" Nordyke, please visit our Heartfelt Sympathies Store.

Receive notifications about information and event scheduling for Clinton

We encourage you to share your most beloved memories of Clinton here, so that the family and other loved ones can always see it. You can upload cherished photographs, or share your favorite stories, and can even comment on those shared by others.

Posted Jul 09, 2019 at 08:55am
Oh how I am gonna miss my Uncle “BUP”. My memories are so many from my summers spent with he and aunt Dixie, that I can’t just pick one.......rides in the model T, swimming In their pool, running up and down the stairs at their house, and playing with Daggy!
The one the that I do know only he and I had was our names for one another. There is no one else ever that called me “FEATHER” and I will never have another Uncle “BUP”. Something so small that now is one of the most special things I could have to remember that no one else has!!!!
Comment Share
Share via:
S

Posted Jul 08, 2019 at 10:14am
Please accept our most heartfelt sympathies for your loss... Our thoughts are with you and your family during this difficult time.

Flowers were purchased for the family of Clinton Nordyke. Send Flowers 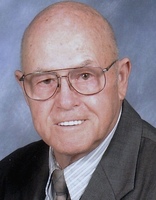