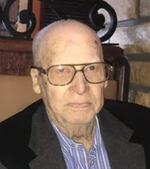 He was born to Alvin and Calvin (Watkins) Swinney on October 7 1935, McKnight, TX.

He was a loved man from everyone from his wife, kids, and grandchildren. His hobbies included; hunting, fishing, farming, and golfing. Donald farmed and ranched for most of his life and enjoyed his trade. He was a past School Board Member of the USD#217 at Rolla and Morton County Fair Board. Donald was in the Army for two years. He was a Boy Scout Leader for many years. Donald was Kansas County Highway Supervisor of the Year in 1999. He worked for Morton County Road Department for 21 years.

A memorial has been established for the First Church of God, Hugoton. Memorials may be mailed to Robson Funeral Home, P.O. Box 236, Hugoton, KS 67951.