To share your memory on the wall of Harry Ferguson, sign in using one of the following options:

To send flowers to the family or plant a tree in memory of Harry Laurence Ferguson, please visit our Heartfelt Sympathies Store.

Receive notifications about information and event scheduling for Harry

We encourage you to share your most beloved memories of Harry here, so that the family and other loved ones can always see it. You can upload cherished photographs, or share your favorite stories, and can even comment on those shared by others.

Posted Nov 14, 2019 at 10:30pm
To Bobbi and family, I’m so sorry for your loss. Harry has always been one of my favorite memories of Phi Sigma Epsilon at Emporia State. I’ll always remember him as a good, humble man who would do anything for anyone. I will never forget him.

Posted Nov 14, 2019 at 03:39pm
Coach-
So sorry to hear of Harry's passing. I have fond memories of him helping me learn to jump serve and spending my summer working with him in Brazilton. Be assured of my prayers for you and your family. May the comfort of shared memories, friends and family help you through this difficult time.
Comment Share
Share via: 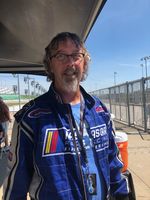