To share your memory on the wall of June Lahey, sign in using one of the following options:

June was the daughter of Perry and Caroline (Inscho) Campbell. She was born on June 16, 1927 in Stevens County, Kansas.

June and Vance Arthur Lahey were married May 14, 1948, at Tucumcari, New Mexico. To this union were 6 children, Vana, Sarah, Tom, Darcy, Becky and David. She loved her family and enjoyed being with them. June enjoyed baking pies and doing for others.

She was a member of United Methodist Church at Moscow, Kansas.

A memorial has been established for the United Methodist Church, Moscow. Memorials may be mailed to
Robson Funeral Home, PO Box 236, Hugoton, Kansas 67951.

Funeral service will be held on Saturday, January 18, 2020, at 2 PM at the United Methodist Church, Moscow, Kansas with Patty Lahey presiding and burial following at Moscow Cemetery, Moscow, Kansas.

To send flowers to the family or plant a tree in memory of June Rose Lahey (Campbell), please visit our Heartfelt Sympathies Store.

Receive notifications about information and event scheduling for June

We encourage you to share your most beloved memories of June here, so that the family and other loved ones can always see it. You can upload cherished photographs, or share your favorite stories, and can even comment on those shared by others.

Posted Jan 16, 2020 at 12:25pm
Tom, Vana, Darcy, Becky and families.
Sorry to hear about the loss of your mother. June was always a joy to be around and talk to. She always seemed to have a lot of energy and I do not think that she ever met someone that she did not like. The world was a better place because of her.
Comment Share
Share via:
HS

Flowers were purchased for the family of June Lahey. Send Flowers 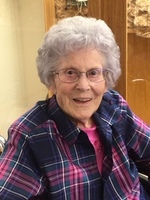