To share your memory on the wall of Margaret Burrows, sign in using one of the following options:

Tiny was born June 6, 1918, at her family farmhouse in Texas County, Oklahoma, to her parents Vernon and Ruth Lewis. She lived through many of the major events that marked the 20th Century including the 1918 Spanish Flu Pandemic, the Dust Bowl, the Great Depression, and World II.

Tiny attended a county school before marrying and starting a family of her own. Tiny married her husband of 74 years, Lee Marlin Burrows, in Clayton, New Mexico, in 1938. Tiny and Lee moved from Kansas to the Los Angeles, California, area shortly after they were married. They were blessed with two sons, Larry Franklin and Dennis Edward. In 1949, Lee and Tiny moved back to Stevens County, Kansas, and began their life working together on the farm.

Tiny was a homemaker who enjoyed living from the land God gave her, Tiny kept a garden and enjoyed canning the vegetables and fruits she grew each season. She raised chickens and enjoyed cooking and baking, especially when she was making gingerbread boys and girls with her grandchildren.

Tiny was very talented at embroidery and made many beautiful tablecloths, pillowcases, and towels. She also embroidered many quilts as wedding and baby gifts for her grandchildren and great grandchildren. She loved entering her work in the county fair, where she volunteered well into her nineties.

Tiny was a lifetime member of the First Christian Church of Hugoton where she taught Sunday school for many years, helped with bible school, and served countless funeral dinners. Tiny worked alongside Lee volunteering with Gideons International. She particularly enjoyed handing out bibles to children in schools and hospitals.

Tiny was preceded in death by her parents, Ruth and Vernon Lewis; husband Lee Burrows; son Dennis Burrows; one brother and four sisters.

Funeral services will be held on July 25 at the First Christian Church of Hugoton at 10:00 a.m. Burial will follow at the Hugoton Cemetery. In light of the COVID-19 crisis, the family asks that those attending the funeral observe social distancing and wear masks while indoors.

Tiny requested that memorials given in honor of her life be given to Gideons International and may be sent to the Robson Funeral Home, PO Box 236, Hugoton, KS 67951.

To send flowers to the family or plant a tree in memory of Margaret Gertrude "Tiny" Burrows, please visit our Heartfelt Sympathies Store.

Receive notifications about information and event scheduling for Margaret

We encourage you to share your most beloved memories of Margaret here, so that the family and other loved ones can always see it. You can upload cherished photographs, or share your favorite stories, and can even comment on those shared by others. 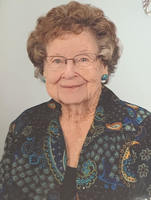