To share your memory on the wall of Melvin Towner, sign in using one of the following options:

Dwain was born on April 4, 1926 near Hooker, OK to Floyd and Thelma Towner.
Melvin Dwain Towner

Dwain was born on April 4, 1926 near Hooker, OK to Floyd and Thelma Towner.

He served honorably in the US Army during WWII in the Philippines and returned to pursue an engineering degree at the University of Colorado, ultimately growing a successful family farm operation. After retirement, he was dedicated to the community as a volunteer for Hospice and was instrumental in organizing Project Hope.

Aside from his continued love and devotion to his family, Dwain had a passion and talent for working on all things mechanical and restored multiple automobiles and tractors. He projected kindness and generosity throughout his life.

He is survived by his wife, children, brothers Roy and Gary, and sister Eileen Keyser. He was preceded in death by his parents and brother Don.

A private burial will be held at Hooker Cemetery, Hooker, OK at a later date.

In lieu of flowers a memorial has been established for Pheasant Heaven Charities or Project Hope. Memorials may be mailed to Robson Funeral Home, P.O. Box 236, Hugoton, KS 67951.
Read Less

To send flowers to the family or plant a tree in memory of Melvin Dwain Towner, please visit our Heartfelt Sympathies Store.

Receive notifications about information and event scheduling for Melvin

We encourage you to share your most beloved memories of Melvin here, so that the family and other loved ones can always see it. You can upload cherished photographs, or share your favorite stories, and can even comment on those shared by others. 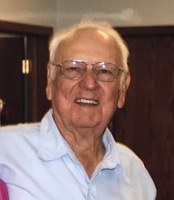