To share your memory on the wall of Melvin Webb, sign in using one of the following options:

Melvin was a very active member in his community and within his church. He was member of American Legion, Farm Bureau Association, Moscow United Methodist Church, and Pioneer Electric Board. He was on USD 209’s Board of Education for many years while his boys were in school. He was a Stevens County Commissioner and Mayor of Moscow. He was a City Councilmen for Moscow. He enjoyed being a farmer and raising any crop that would grow. His first love was cows and raising them.

To send flowers to the family or plant a tree in memory of Melvin Hardy Webb, please visit our Heartfelt Sympathies Store.

Receive notifications about information and event scheduling for Melvin

We encourage you to share your most beloved memories of Melvin here, so that the family and other loved ones can always see it. You can upload cherished photographs, or share your favorite stories, and can even comment on those shared by others.

Posted Aug 04, 2019 at 08:28pm
My deepest sympathy to Mark and the Webb family. I went to school with Mark and Tim with Tim being in the same class. Although my family moved from Moscow in 1962, I remember the Webb family very well. Melvin & Annie were friends with my parents. Thinking of all who loved Melvin during your time of sorrow!
Comment Share
Share via:

USD 483 Staff purchased the The FTD Comfort Planter for the family of Melvin Webb. Send Flowers 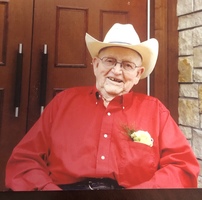