In Memory of
Murray
Hayworth
1936 - 2018
Click above to light a memorial candle.
Memorial Candle Tribute From
Robson Funeral Home - Hugoton
"We are honored to provide this Book of Memories to the family."
View full message >>>
Send Flowers
Menu

In the event that there is an error
in the information presented,
please contact the funeral
home by clicking here. 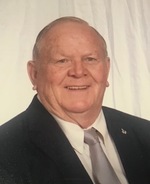 Celebration of a life well lived. Murray’s obituary is written in the vast amount of friends he had and the strangers that never remained strangers. Murray never forgot a face names would never stick, but faces he remembered.

Murray served on several corporation boards. He farmed and ranched from a very young age to 1985. In 1987 he started working for Lawson Products, selling “nuts & bolts”. He accumulated many friends through this line of work. In 2002 Murray became a crop adjuster where he made many more friends. Murray was always honest, did not lie even when a small white lie might have smoothed over a situation. On August 6, 1967 Murray acquired a wife, Sheryl Hayworth and a daughter. Le always said when we married dad. In October 1968, Sherri was born, and was the apple of his eye. Murray was a strong Christian and his faith carried him through her death.

He was preceded in death by his parents and daughter, Sherri Hayworth.

Memorials have been established for League House or Pheasant Heaven Charities. Memorials may be mailed to Paul’s-Robson Funeral Home-PO Box 236- Hugoton, KS 67951.

Due to allergies the family has requested no flowers, Donations to the Memorials in lieu of. Thank you.


To send flowers to the family or plant a tree in memory of Murray Hayworth, please visit our Heartfelt Sympathies Store.