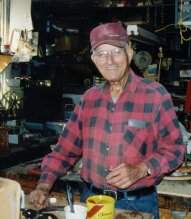 Tony was raised in Ellis, Kansas and moved to Johnson in the early 40's.

Tony farmed with R.H. Trostle for over 50 years, after which he retired.

He will be remembered as an accomplished carpenter, building numerous pieces of furniture for family and friends.

A private internment is planned.

Friends may call at Tony's home to visit with friends and family members from 1 to 4 p.m. Saturday March 7.

Robson Funeral Home, Ulysses is in charge of arrangements.
To order memorial trees or send flowers to the family in memory of Anthony Riedel, please visit our flower store.