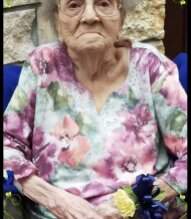 A memorial has been established for Pioneer Manor and Hugoton Senior Center. Memorials may be mailed to Robson Funeral Home, P.O. Box 236, Hugoton, KS 67951.

In accordance with current CDC and Kansas Health Department of Health recommendations a private Graveside Service will be held on Saturday, March 28, 2020, at 2 PM at Hugoton Cemetery, Hugoton, KS.

Robson Funeral Home, Hugoton is in charge of arrangements.
To order memorial trees or send flowers to the family in memory of Barbara Jean Furr (Olinger), please visit our flower store.