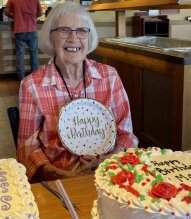 Beulah Mae was a lifelong resident of Stevens County. She was born August 14, 1923, in Hugoton, Kansas to Gainum and Ella Ardelia (Standley) Dumcum.

Beulah Mae was a spiritual woman. She had a deep love of God and the Bible. She instilled that love in her 4 daughters. She was a lifetime member of the First Christian Church of Hugoton. During that time she served as the church secretary for 30 years. She enjoyed reading about Jesus in her adult ladies' Bible study and with her church family. She enjoyed an encouraging ministry that reached out to people in the community as well as all over the world. Everyone who came into the church office
enjoyed visiting with her.

Beulah Mae was a woman who was ahead of her time. After her retirement, she worked full time for 8 years at the Stevens County Gas Capital Museum. She retired at the age of 94.

In 2000, Beulah Mae had the privilege of being the Stevens County Fair Queen, the requirement of being a resident of Steven County for 75 years.

Beulah was loved by all from family to members of the community, a wonderful and loving woman to minimally describe Beulah Mae Carter.

A private family burial service will be held. A celebration of life with the public will be held at a later date in the Spring.

Robson Funeral Home, Hugoton is in charge of arrangements.
To order memorial trees or send flowers to the family in memory of Beulah Mae Carter (Dumcum), please visit our flower store.