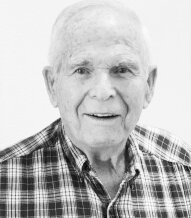 Warren Robert “Bob” Sessler, 93, of Amarillo, Texas, passed away peacefully in his sleep, Thursday, March 10, 2022. His children were able to spend the last few days with him.

Born March 22, 1928 in Pratt, Kansas, he was the third child of six, born of Warren Martin and Beulah Maybelle (Boaz) Sessler.

Bob graduated from Hugoton High School in 1947 and married his high school sweetheart, JoAnn Forward, June 1, 1948 in Hugoton, KS. Together, they walked hand in hand through life for more than 69 years. JoAnn passed away in 2017.

In addition to those mentioned above, Bob is survived by brother, Francis David Sessler (Ann) of Phoenix, AZ and sister, Betty Carol Tackett (Jerry, deceased) of Fort Worth, TX. Also, in-law brothers and sisters: Charles and Evalene Forward of Hugoton, Wayne and Mary Ann Forward of Moscow, Mildred Moser of Hugoton, plus numerous nieces, nephews and friends.

Bob was preceded in death by his wife, JoAnn, his parents, Warren and Beulah, his sister Marjorie Patterson of Chandler, AZ, brothers, Harry Sessler and Marvin “Mike” Sessler, both of Phoenix, AZ. Also, Earl Gene Moser, Maxine and Ebert Phillips, Jean and Harold “Sonny” Coulter, all of Hugoton, and Dula and Jim Hughes of Haverhill, Ohio.

Visitation and Funeral services will be held at the Hugoton Branch Meetinghouse of the Church of Jesus Christ of Latter Day Saints, 520 E First Street, Hugoton, KS on Monday, March 14th: Viewing and Visitation will begin at 1:00 pm followed by the Service at 2:00 pm. Interment will be at the Hugoton Cemetery.

A light meal will be provided at the church for the immediate and extended family, following the Cemetery.

Funeral Arrangements were made by Robson Funeral Home, Hugoton, KS.
To order memorial trees or send flowers to the family in memory of "Bob" Warren Robert Sessler, please visit our flower store.