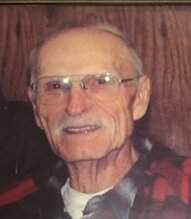 The son of Wayne Joseph and Margret (Hamilton) Oder, he was born January 19, 1931, at Stevens County, Kansas. He was born on his grandfather farm. He was the oldest of three children. He was a lifetime resident.

He was preceded in death by his parents, two infant brothers, sisters, Esther Schroeder and Mary Harms.

Memorials have been established for Assembly of God Church. Memorials may be mailed to Robson Funeral Home-Box 236-Hugoton, Kansas 67951.

Friends may call Thursday from 2 P.M. to 8 P.M. at the funeral home. Family will receive friends and family at Robson Funeral Home from 6 P.M. to 8 P.M tonight.

Robson Funeral Home, Hugoton is in charge of arrangements.
To order memorial trees or send flowers to the family in memory of Bobby Lee Oder, please visit our flower store.

Family will be at Robson Funeral Home, Hugoton from 6 pm to 8 pm to receive friends and family