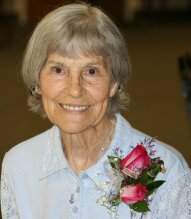 Bonnie Dean Dutton (Glasgow), 94, died on September 25, 2021, at Snyder Village in Metamora, IL.
Bonnie was born on January 23, 1927, in Fairvalley, Oklahoma to James Monroe Russell and Amanda Jane (Littrell) Russell. She married Nelson Wayne Dutton, both from Freedom, Oklahoma, on May 10, 1946, in Grand Junction, Colorado.

Bonnie was a schoolteacher for a small schoolhouse while Nelson served in the military. She was also a dental assistant in Winfield and went on to help her son and daughter in-law (David and Perlita Dutton) open and run their dental practice in Elkhart, KS in 1982. Bonnie and Nelson moved to Great Bend, KS in 1990 where she worked with and mentored troubled youth. Following Nelson’s death in 1990, she moved to Winfield, KS in 1998 after marrying John Glasgow who passed away in 2002. She moved from Winfield to Illinois in December 2012.

A memorial has been established for the Alzheimer’s Foundation. In care of Robson Funeral Home, P.O. Box 606, Elkhart, Kansas 67950.

Robson Funeral Home, Elkhart is in charge of arrangements.
To order memorial trees or send flowers to the family in memory of Bonnie Dean Dutton (Russell), please visit our flower store.