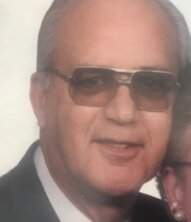 Carlyle and Maurine (Foster) Kiehne were married on March 26, 1953 at United Methodist Church in Satanta, KS. She preceded him in death on October 18, 2016.

For several years Carlyle and Maurine moved around while Carlyle helped build grain elevators. They settled in Satanta in 1957 to make their home with their boys.

They owned and operated several retail businesses including construction of homes and small business buildings. Carlyle enjoyed working with his sons on remodeling projects and building homes.

Carlyle served in the United States Army for two years. He was an active member in his community; United Methodist Church, Satanta Chamber of Commerce, Satanta Development Inc., Chairman of Great Plains Development, Board Member of Satanta District Hospital, Satanta City Council and a 50 plus years of Satanta American Legion.

He enjoyed taking trips with his family to Colorado. Carlyle was a retired builder, businessman, and hospital administrator.

He was preceded in death by his parents, grandson Tyler Kiehne, brother Louval Kiehne and sister Andrine Wilke.

Memorial Service will be held Monday, November 4, 2019, United Methodist Church, Satanta, KS at 2 p.m. Interment will be at later date.

Robson Funeral Home, Satanta is in charge of arrangements.
To order memorial trees or send flowers to the family in memory of Carlyle Edward Kiehne, please visit our flower store.

Interment will be at a later date.