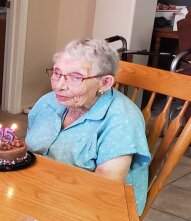 Harding Capper Nix and Carol were married June 4, 1949, Hillsboro, KS. To this union were Charles and Nancy.

She loved her family and enjoyed spending time with them. She loved crocheting, reading and doing her daily devotionals. Carol enjoyed making Christmas candy for her family.

Robson Funeral Home, Hugoton is in charge of arrangements.
To order memorial trees or send flowers to the family in memory of Carol Garnet Nix (Thresher), please visit our flower store.