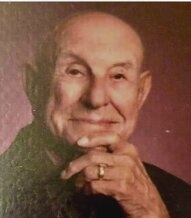 He was the son of William Herbert and Hazel E. (Noll) Harper. Bill attended undergraduate college at Southwestern College in Winfield and DePaul University in Chicago prior to receiving his Doctor of Dental Surgery from the University of Missouri at Kansas City in the spring of 1949.

Bill met the love of his life, Dolores in Kansas City while Bill was attending Dental School. Bill and Dolores were married in Gilman City, Mo. on July 17, 1949, shortly after Bill’s graduation from Dental School. Born to this union were three sons, Mark, Kim, and Keith.

Survivors include sons Kim Harper and wife Carolyn of Hugoton and Keith Harper and wife Shannon of Aurora, Co. In addition to his wife, Dolores who preceded Bill in death in January 2017, their eldest son Mark Harper and two grandchildren (Brent and Brian Gaskill) also preceded Bill in death. Survivors include grandson Craig Gaskill of Kansas City, Mo. and his partner Greg Tobey; granddaughter Jordan Harper Blackburn of Highlands Ranch, Co. and her two sons, Deklan and Dylan Blackburn and grandson Case Harper of Aurora, Co.

Bill is also survived by two nieces, Becky Rike and husband Eldon Rike of Corning, Ia. and their daughters Lisa and husband Rob (and their children Stephanie, Derek, and Kara), Katie and her husband Jeff (and their daughter Chloe) and Becky and Eldon’s son Dan; and Amy Brown of Milwaukee, Wi. and her son Chris and his wife Tricia and Amy’s daughter Allie.

Bill was a true patriot who loved his country with a passion. After graduating high school in the spring of 1941, he enrolled at Southwestern College on a basketball scholarship. After the attack on Pearl Harbor on December 7, 1941, Bill enlisted in the Army a short time later. Bill was part of the 104th Infantry (Timberwolf) Division, Company A. His Division was the first to travel from the United States to France. A little more than a month after their arrival, the Timberwolves went into the battle lines where they remained in continuous combat for over six months. They joined up with Russian forces wherein that sector was the first to be cleared and completely conquered. That was as far as the US troops were allowed to go, allowing the Russians to take Berlin. Bill was stationed 50 miles south of Berlin, Germany when his commander informed his troops that Germany had surrendered; the date since being known as VE day. Shortly after VE day, his division was shipped back to the New York Harbor with double occupancy. This meant that each bunk was assigned to two men. One would sleep during the day and one would sleep at night.

After WWII, he joined the National Guard while attending dental school on the GI Bill. When the Korean war broke out after his graduation from Dental School, he was drafted into the Air Force as a dentist. He was stationed at Reese Air Force base in Lubbock, Texas. On his first day of duty, his commanding officer called him to his office to meet with him. After studying his combat file at length, his commander said that given his prior service he should not have been conscripted as Bill had more than done his duty for the country. At the conclusion of the meeting, his commander gave him free rein to do whatever he needed to do to both serve his Air Force commitment along with maintaining his new dental practice in Hugoton.

Bill was truly one of a kind and will be sorely missed by his legion of friends and family that he leaves behind. Bill was well known in Hugoton and throughout the surrounding area having practiced dentistry in Hugoton for over 40 years. Throughout his life, Bill served on numerous community boards and councils and was recently most proud of his tenure on the Benevolent Committee of Pheasant Heaven Charities. Bill was an avid golfer, hunter, and fisherman having instilled the love of such pursuits in his sons and their wide circle of friends who looked to Bill as their mentor and teacher of such pursuits.

In lieu of flowers, a memorial has been established in Bill's memory with Pheasant Heaven Charities in Hugoton. Memorials may be mailed to Robson Funeral Home, PO Box 236, Hugoton, Ks. 67951 in Bill's name for the benefit of Pheasant Heaven’s Charities.
To order memorial trees or send flowers to the family in memory of Charles William "Bill" Harper, please visit our flower store.