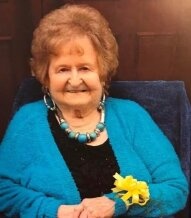 Christine was a member of the Moscow Baptist Church, she had a strong Faith and loved Jesus. Her hobbies included cooking, sewing, and all things shopping.

A memorial has been established for Pheasant Heaven Charities, in the care of Robson Funeral Home, P.O. Box 236, Hugoton, Kansas 67951.

Robson Funeral Home, Hugoton is in charge of arrangements.
To order memorial trees or send flowers to the family in memory of Christine Marie Munson-Suddeth (Stoddard), please visit our flower store.