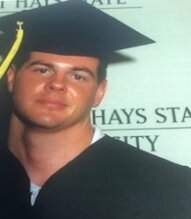 Chris was the son of David Thane and Angela Jean (Carroll) Lahey, he was born January 8, 1981, in Ulysses, KS.

Graveside Service will be held on Saturday, June 15, 2019, 11 AM at Moscow Cemetery, Moscow, KS.
To order memorial trees or send flowers to the family in memory of Christopher John Lahey, please visit our flower store.