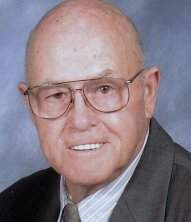 Buss was born to Wayne and Doris (Ridpath) Nordyke, June 15, 1935, in Feterita, KS. He graduated from Hugoton High School and grew up in the United Methodist Church of Hugoton.

Buss and Dixie L. Kagarice were married November 19, 1954, in Hugoton, KS. To this union was a daughter; Sherri and a son; Kelly.

He served in the United States Air Force in 1958.

Buss was a plant manager and retired from Midwest Pipe Coating in Schererville, IN. In 2005 they decided to move back to Hugoton to enjoy family and friends. He loved to do genealogy and work on Model T cars especially of those made in 1926/1927. He also played golf in his free time.

Buss was preceded in death by his parents, a son, Kelly G. Nordyke, sister, Phyllis Duncan and brother, Jim Nordyke.

Robson Funeral Home, of Hugoton is in charge of arrangements.
To order memorial trees or send flowers to the family in memory of Clinton Darrell "Buss" Nordyke, please visit our flower store.