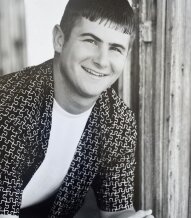 Cole Warner Wing, 38, passed away Thursday, April 7, 2022, in Somerset, Kentucky. He was the son of Matt and Jeana (Stutz) Wing. Cole was born May 14, 1983, in Hugoton, Kansas; where he grew up and attended school and had a love for football and baseball.

As a kid he was involved in many things such as showing cattle, playing sports, and rodeoing. Cole also had a passion for motorcycles, snow skiing, and music.

He and Tammy Teafatiller were married April 16, 2010, in Dalhart, Texas. To this union were two children, Corey, and Lexi.

Cole helped his dad with the livestock auction businesses and taking care of outside cattle. He later on worked for a welding company in Somerset, Kentucky.

Cole was a man who lived his life fully and in the fast lane. He was a family man who loved his family wholeheartedly. His love for his children was undeniable and enjoyed spending time with them.

He was baptized in 2010 at the Hillside Christian Church in Dalhart, Texas.

He was preceded by his maternal grandfather, Jon Stutz, paternal grandparents, Larry and Jo Wing, and in-laws, Tim, and Debbie Teafatiller.

A memorial has been established for Cole Wing Children's College Fund. In the care of Robson Funeral Home, P.O. Box 236, Hugoton, Kansas 67951.

To order memorial trees or send flowers to the family in memory of Cole Warner Wing, please visit our flower store.