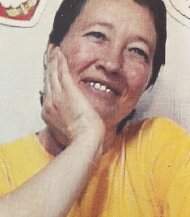 Connie was the daughter of William Junior and Norma Jane (Rasler) Heston. She was born on November 18, 1954 in Hugoton, Kansas.

Connie Heston and Lowell Williams were married on September 27, 1970 and to this union was Joyce, Ricky and Melissa. They later were divorced.

She loved spending time with her family. Her hobbies were writing poems and crossword puzzles.

She was preceded in death by her parents.


Funeral service will be held on Thursday, November 19, 2020 at 1:30 PM at Robson Funeral Home, Hugoton, KS. Burial will be following at Hugoton Cemetery.


To order memorial trees or send flowers to the family in memory of Connie Sue Murphy (Heston), please visit our flower store.