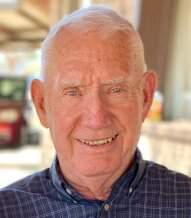 Marvin “Dale” Cole, age 85, of Ulysses, Kansas, passed away on August 2, 2020, surrounded by his family, after a long battle with Alzheimer’s disease.

Dale was born on January 13, 1935, in Lindsay, Oklahoma to Doc and Lillie (Griffin) Cole. His stories of playing basketball, working broom corn, frailing pecans and growing up in a large family of 10 children on the farm in Southern Oklahoma provided his family many hours of entertainment and laughter. Dale graduated from Pernell High School in 1953 and attended East Central State University in Ada, OK. In 1956, he married his high school sweetheart, Shirley Ann Jones. After graduating from college, Dale taught in Ness City, Kansas, for three years before earning his Master’s degree from Oklahoma State University in 1960.
Dale and Shirley moved to Ulysses, Kansas, in August 1959. Dale embarked on a long tenure at Ulysses High School, teaching science and coaching basketball and tennis. He absolutely loved teaching and took great pleasure in sharing stories from the classroom with his family. As the years went on, he considered encounters with his former students the greatest treats. His passion for educating didn’t stop at the doors of the classroom but continued in his home where he loved to “teach” his kids and grandkids. An avid fisherman and gardener, he enjoyed camping, playing cards, and family reunions. He was also the greatest fan of the sports and activities of his children and grandchildren. He was a 60-year member of Lions Club International and a long-time member and deacon of First Baptist Church of Ulysses, Kansas.

He was welcomed to his home in Heaven by his parents, stepmother Edie Cole; brothers, Dennis Cole, Dugie Cole, Darrel Cole, and Dan Cole; and sister-in-laws Sylvia Cole and June Cole.

Funeral Service will be Saturday, August 8, 2020, at 10:00 a.m. at First Baptist Church in Ulysses, Kansas, with Reverend Steve Swann and Pastor Jay Mykytuik presiding. Interment of ashes will be at the family cemetery in Foster, Oklahoma at a later date yet to be announced. Friends and family may call at Robson Funeral Home in Ulysses, Kansas, on Friday, August 7, 2020, from 3:00 p.m until 8:00 p.m. Family requests memorial contributions be given to Ulysses Lions Club Sight Project or First Baptist Church Building Fund in care of Robson Funeral Home, 218 South Main, Ulysses, Kansas 67880. An online guestbook is available at https://bit.ly/dalecole.


To order memorial trees or send flowers to the family in memory of Dale Cole, please visit our flower store.