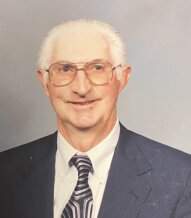 Darrell was born to his parents, Elliott and Bessie (Thomas) Skinner, at their home in the country. He was 91 years old. He graduated from school at Bel Plaine, Kansas and moved to Hugoton to farm with his father.
This was his dream. He called himself a Steward of God’s land.

He married his wife Virginia Hatfield, and she moved west. She knew as his wife; labor was never doing that, and the land became one. They were married 72 years and spent that entire time together.

A memorial has been established for the Lone Star Friends Church. Memorials may be mailed to Robson Funeral Home, P.O. Box 236, Hugoton, KS 67951.