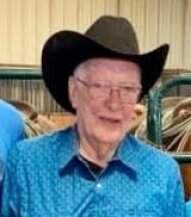 Donald Paul Mecklenburg, of Elkhart, Kansas, passed away Tuesday, December 3, 2019, at the age of 84.

Don was born June 3, 1935 near Hancock, Minnesota to the late Walter and Ella (Halverson) Mecklenburg and was their only child. Don farmed alongside his father until he graduated with a degree in Forestry and Range Management from the University of Minnesota. In 1959, he went to work for the U.S. Forest service at Bayfield, Colorado while serving 6 years in the U.S. Army Reserve. He then was promoted to Ranger in Cody, Wyoming in 1966. Cimarron National Grasslands is where he retired in 1986. Those who knew Don, know how much he loved God, his bible, horses, as well as his family and friends.

A private burial will be held at a later date. In lieu of flowers a memorial has been established for Project Hope. Memorials may be mailed Robson Funeral Home, P.O. Box 606, Elkhart, KS 67950.
To order memorial trees or send flowers to the family in memory of Donald Paul Mecklenburg, please visit our flower store.