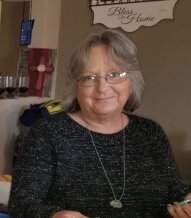 She was the daughter of David Lonzo and Wilma Kay (Gibbons) Ellis on February 12, 1964, Elkhart, Kansas.

She and Daniel Robert Fisher were married September 3, 2009 in Elkhart, Kansas. He precedes her in death.

Dorinda was loved by all that knew her, she had a kind and loving heart. She attended church at Hillcrest Baptist and Church at Jake’s Barn. She loved her grandchildren very much and loved spending time with them.

A memorial has been established for Yarbrough School. Memorials may be mailed to Robson Funeral Home, P.O. Box 606, Elkhart, Kansas 67950.

Robson Funeral Home, Elkhart is in charge of arrangements.
To order memorial trees or send flowers to the family in memory of Dorinda Kaye Fisher (Ellis), please visit our flower store.