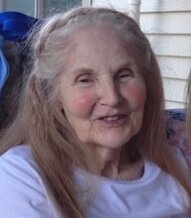 Edith was the daughter of Jim and Esther (Stevens) Gunter. She was born on March 8, 1934, in Jamestown, Tennessee. She grew up in Tennessee.

Edith and L.D. Batie were married in January of 1950. To this union were nine children; Doug, Pam, Tommy, Peggy, Joe, Linda, David, Debbie and Lila.

Later, Edith married Gary Williams and he preceded her in death.

Edith loved and enjoyed being with her family. She enjoyed singing and playing the guitar.

A memorial has been established for the Alzheimer’s Association. Memorial may be to Robson Funeral Home, PO Box 236, Hugoton, Kansas 67951.

Funeral service will be held on Saturday, January 18, 2020 at 10 AM at the First Church of God, Hugoton, Kansas with Pastor Israel Franco.

Graveside service will be held on Saturday, January 18, 2020 at 3:30 PM at the Willowbar Cemetery at Keyes, Oklahoma.

Robson Funeral Home, Hugoton is in charge of arrangements.
To order memorial trees or send flowers to the family in memory of Edith Batie (Gunter), please visit our flower store.