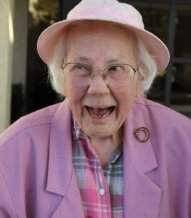 Edna was the daughter of Sam and Etta (Stuck) Cammarn. She was born on July 24, 1921 in Seward County, Kansas. She grew up in the Liberal community and graduated in 1940 from the Liberal High School.
In 1950 she received her LPN nursing degree.

She was preceded in death by her parents, Sam and Etta; her brother, Leslie Cammarn; her husband Red; one daughter Karlene Carol Hodge; and two grandsons, James Walker and John Walker.

A memorial has been established for the St. Jude’s Hospital. Memorials may be mailed to Robson Funeral Home- PO Box 747, Satanta, Kansas 67870.

Graveside service will be held on Saturday, January 4, 2020 at 2 PM at the Haskell County Cemetery, Sublette, Kansas with Pastor Steve Unruh presiding.

Viewing will be Thursday and Friday from 10 AM to 8 PM as well as Saturday from 11 AM to 12:30 PM at Robson Funeral Home, Satanta, KS.
To order memorial trees or send flowers to the family in memory of Edna Irene Birmingham (Cammarn), please visit our flower store.