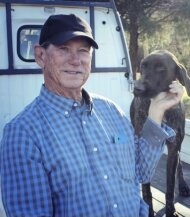 The son of Fred Frank and Jerline Grace (Clair) Cowser, he was born on October 6, 1950, in Rolla, Kansas.

Hobbies were Hunting with his three girls Bell, Jewel and Gabby, Fishing and keeping up with his yard. He really enjoyed visiting with everyone and playing jokes on his family and friends.

He is preceded in death by his parents, two brothers, Freddy Cowser and Robert Cowser.

A memorial has been established for the Alzheimer’s. Robson Funeral Home, P.O. Box 236, Hugoton, Kansas 67951.

A funeral service will be Saturday, June 25, 2022, at 10 AM, at First Christian Church with Pastor Marcus Light presiding. Burial will follow at Hugoton Cemetery, Hugoton, Kansas.

To order memorial trees or send flowers to the family in memory of Edward Daniel Cowser, please visit our flower store.

The family will receive friends from 6 PM to 7 PM at Robson Funeral Home, Hugoton.