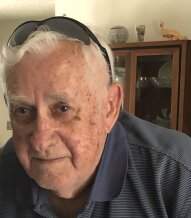 The son of Edward Frank and Nannie (McCowan) Mohs, he was born December 13, 1927, Pretty Prairie, Kansas.

Junior was a State Champion in his class of trap shooting in 1972. He was very handy and owned Spudnut Shop and Mohs Liquor.

A memorial has been established for the Cal Farley Boys Ranch in Amarillo, Texas. Memorials may be mailed to Robson Funeral Home, PO Box 606, Elkhart, KS 67950.