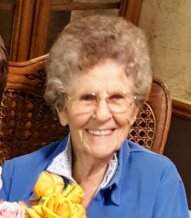 She was born May 1, 1924 in Hugoton to Lee and Etta E. (Brower) Reynolds. She lived most of her lifetime in Hugoton. She loved Hugoton.

She and Joseph A. Stuart were married on March 18, 1943, Elkhart, Kansas. To this union were three daughters, Patty, Peggy, and Penny.

Edythe loved quilting, she made all of her children and grandchildren quilts. She loved flowers and bright colors.

A memorial has been established for The Seasons Assisted Living, Perryton, TX. Memorials may be mailed to Robson Funeral Home, P.O. Box 236, Hugoton, Kansas 67951.

Robson Funeral Home, Hugoton is in charge of arrangements.
To order memorial trees or send flowers to the family in memory of Edythe Mae Stuart (Reynolds), please visit our flower store.