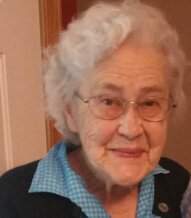 Eunice Marie (Kreider) Zook was born on October 24, 1921, at Shannon, Illinois, the daughter of David and Cora (Rodermel) Kreider. She went to be with her Savoir at Liberal, Kansas, on December 6, 2021.

After finishing high school in Shannon, Eunice furthered her education in University Park, Iowa, where she earned her B.A. degree in Kletzing College. She then taught high school in Coggon, Iowa, for two years.

On June 21, 1945, Eunice was married at University Park to Tech/Sergeant Max Zook from Newton, Kansas. Until the end of World War two, they lived in Salinas, California, where Max was stationed at the U.S. Army/Air Force base.

A memorial has been established for Nazarene Compassionate Ministries. In the care of Robson Funeral Home, P.O. Box 606, or Church of the Nazarene, P.O. Box 240, Elkhart, Kansas 67950.

Graveside and committal will be held at a later date in University Park, Iowa.