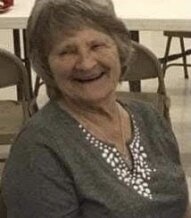 She was born to William Millard and Myrtle Alberta (Harvey) Peterson on November 27, 1937, Liberal, Kansas.

Eva was a member of the Hugoton Church of Christ. She enjoyed cooking. No one went away from her table hungry. She loved her family and never missed an opportunity to go support their events. You could stop by her house day or night, for a cup of coffee, a meal and some loving advice. She opened her home to many people over the years. Eva was a very loving and giving person.

A memorial has been established for New Mexico Children's Home. Memorials may be mailed to Robson Funeral Home, P.O. Box 236, Hugoton, KS 67951.

A private graveside will be held Thursday, December 10, 2020, at Hugoton Cemetery. There will be a public memorial service at a later date. The graveside service will be live on Robson Funeral Home Facebook Page.

Robson Funeral Home, Hugoton is in charge of arrangements.
To order memorial trees or send flowers to the family in memory of Eva Marie McGill (Peterson), please visit our flower store.