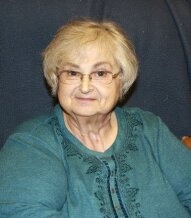 Born in Diamond, Missouri on Oct. 9, 1946 to Silas Glen and Eula Dean (Edens) Eubanks, Evelyn grew up on her family’s property in the Ozarks. She spent her childhood riding horses, fishing and even attended a one-room schoolhouse with her siblings and cousins.

She graduated from Neosho High School, Neosho, Missouri in 1964. She married her high school sweetheart, Daniel C. Sprenkle soon after on Nov. 21, 1964. The couple moved to Southwest Kansas in 1973 and became lifetime residents of Satanta. They raised their five children — Phillip, Sue, Cindy, Thomas and Robert — in this small community.

Evelyn was active in her community leading Girl Scouts and Girls in Action (GAs) clubs for girls. She taught every age group possible at church but invested most of her time in mission’s education and evangelism. She was a Woman’s Missionary Union and women’s ministry leader for many years. She also led a non-denominational women’s Bible study that met off-and-on for the last 40 years. Evelyn was a member of First Baptist Church, Satanta and Sublette Southern Baptist Church, Sublette.

Evelyn spent many years as an office manager and reporter for the Haskell County Monitor Chief before finding her calling as a paraprofessional at Satanta Jr.-Sr. High School. This led her to earn an associate degree from Seward County Community College. She later retired from the High Plains Educational Cooperative.

She was preceded in death by her husband, Daniel C. Sprenkle on November 19, 1999, her parents and a sister, Gwendolyn Welsh.

A memorial has been established for the Viola Webb Missions Offering through First Baptist Church, Satanta. Memorials may be mailed to Robson Funeral Home, P.O. Box 747, Satanta, KS 67870.

Robson Funeral Home, Satanta is in charge of arrangements.
To order memorial trees or send flowers to the family in memory of Evelyn Roberta Sprenkle (Eubanks), please visit our flower store.

The family will receive friends from 4pm to 6pm at Robson Funeral Home, Satanta.