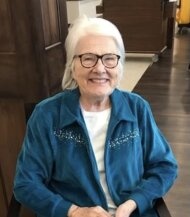 Frances Lucille Ashlock passed away peacefully on the evening of May 22, 2022, at her home in Grain Valley, Missouri, with her husband Cecil, daughter, Carla, son David, and her granddaughter Lisa by her side.

Lucille was born in Buffalo, OK on September 25, 1933, to parents Lloyd Melvin and Annis Lucille (Harmon) Smith. She grew up and attended school in Ashland, Kansas. She worked in the local café as a teenager, where she met Cecil. They were married on January 4, 1953, and were married for 69 years. After Cecil returned from the Army in 1955, he, Lucille, and two daughters, moved to Hugoton, Kansas in 1956, where they lived for nearly 50 years. During those years, Lucille’s jobs, besides being a mother, included serving in the County Treasure’s office as both Deputy, and Treasurer. She then worked at the John Deere dealerships (Roy Bennett and SteveCO Implement), for several years as an executive assistant, then to Clear Creek Trucking Co and Citizens State Bank in the computer department.

Lucille then went to work for Hi-Plains Pizza Hut, serving as Assistant Manager with her daughter Rhonda for 5 years, where they achieved the #1 store in the Nation. Later, she took over as manager of that store, and daughter Carla served with her as her assistant for 7 more years. During that time, Lucille received numerous awards for service and cleanlinesss, but the highlight of her career was a #10 Pizza Hut in the nation, and #2 in the Hi-plains Pizza Hut franchise. Lucille commented that she would have been #1 if the soap dispenser in the restroom would have been full. However, she was very proud of these accomplishments, and so was her family. Her favorite saying was “If you have time to LEAN you have time to CLEAN.”

After retiring, Cecil and Lucille spent several years traveling around the United States, nearly going to all 50 states. While traveling, she did extensive journaling about their adventures.

Once they were done traveling in 2005, they moved to Grain Valley Missouri, near their son David. Lucille and David shared a mutual love for KU Basketball and Kansas City Chiefs football, spending most Saturdays and Sundays together rooting them on. Most memorable was the 2008 KU Championship together in Grain Valley. Lucille was also a member of Heartland Church in Blue Springs, where she developed loving friendships. She loved her Lord and Savior Jesus Christ!

Lucille loved following friends and family on Facebook, where she gathered information on our family’s genealogy. She spent hours researching and documenting her families, and it’s quite extensive.

She was also known for her quick wit and unique laugh. Her kindness was ever present and certainly will be missed.

Lucille cherished ALL her 7 grandchildren and 18 great grandchildren, and she was always delighted when they visited.

Lucille was preceded in death by her parents, one brother Leon Smith, and her granddaughter Angelia (Showers) Dale.

The family would like to thank and recognize granddaughter Lisa Ashlock for taking care of her “grammy”, from February 2020 at their home in Grain Valley. Lisa’s efforts were key to Lucille’s comfort and safety for the remainder of her life.

Memorials have been established for Alzheimer’s Association or charity of your choice. Memorials may be mailed to Robson Funeral Home, PO Box 236, Hugoton, KS 67951.
To order memorial trees or send flowers to the family in memory of Frances "Lucille" Ashlock (Smith), please visit our flower store.