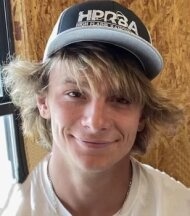 Fray spent the majority of his youth playing sports, riding dirt bikes and 4-wheelers and if he wasn’t trying new tricks on his bike at the skatepark he was swapping parts off all his bikes. There was never a dull moment in the neighborhood as all of Fray’s cousins lived on the same block. Fray lived life in the fast lane and was always game to try anything. He and his siblings were nearly inseparable, and he wholeheartedly loved his little nephews whom he cherished dearly. Fray was extremely protective over all his loved ones, especially his mama. His most recent passions include riding horses, working out consistently, going to church, and working his tail off but most of all Fray was extremely excited to start his own family with Madison and meet his new daughter, Ryverlynn Jean. Fray was currently employed with M & T Pump of Moscow Ks, Mike, Teresa, and Brek Colantonio, with whom he also resided with and without reserve, was included genuinely as a part of their family.

A memorial has been established for his daughter Ryverlynn McDaniels Education Fund. In the care of Robson Funeral Home, P.O. Box 236, Hugoton, Kansas 67951.

The funeral service will be held Saturday, June 18, 2022, at 11 AM, at the Assembly of God Church with Pastor Tim Singer presiding. Burial to follow at Hugoton Cemetery, Hugoton, Kansas.

Robson Funeral Home, Hugoton is overseeing the arrangements.
To order memorial trees or send flowers to the family in memory of Fray Bryan McDaniels, please visit our flower store.

Burial to follow after the Funeral at Assembly of God Church.