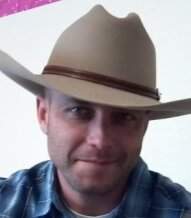 Garret Patrick Larkin, 39, passed away Thursday, December 16, 2021, at Stevens County Hospital, Hugoton, Kansas. He was the son of Michael James Larkin and Kay Cullison Larkin, he was born February 19, 1982, in Kansas City, Missouri.

His personality was like no other, he had a contagious smile and laugh. There was just joy and a presence of being around him. Garret’s hobbies included hunting, playing guitar and the drums, guns, and ice hockey. Garret's guns were very special to him, he enjoyed sighting them in and getting them very precise. He loved his God and his Country.

A memorial has been established for Moscow United Methodist Church. In the care of Robson Funeral Home, P.O. Box 236, Hugoton, Kansas 67951.

The funeral service will be held Wednesday, December 22, 2021, at 10:30 AM, Moscow United Methodist Church with Pastor Patty Lahey presiding. Burial to follow at Moscow Cemetery.