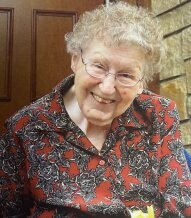 She attended the First Church of God, Elkhart.

Funeral Service will be Tuesday, September 7, 2021, at 2:00 P.M. at the First Church of God, Hugoton with Pastor Israel Franco presiding. Burial following at Hugoton Cemetery, Hugoton, Kansas.
To order memorial trees or send flowers to the family in memory of Gloria Hope Cox (Carter), please visit our flower store.