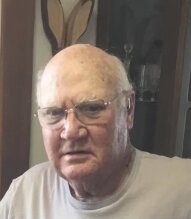 Harold and Delores Fern (Kallenbach) were married February 22, 1951, Rolla, Kansas. To this union were three children, Connie, Ronald, and Michael. He and Delores raised their family in Denver, Colorado. Delores Fern preceded him in death January 1, 2016.

Harold served in the United States Army during the Korean Conflict.

Harold moved family to Denver to complete his degree at Denver University and begin his career. His dedication to his family was his priority.

His gifted talents for woodworking provided us with furniture and many other pieces. He did this as his hobby, also including making children's toys. He enjoyed watching sports and attending DU hockey games. He and Delores travelled and enjoyed their Kanas trips to gather with family and friends. He was a Member of the Woodworker's Guild while in Citrus Heights, CA.

Harold was preceded in death by his parents, two brothers, Wendell and Russell; two sisters, Doris McBride and Lona Leist.

A memorial has been established for American Diabetes Association. Memorials may be mailed to Robson Funeral Home, P.O. Box 236, Hugoton, KS 67951.

Robson Funeral Home, Hugoton is in charge of arrangements.
To order memorial trees or send flowers to the family in memory of Harold F. Morgan, please visit our flower store.