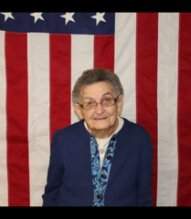 She was a World War II Veteran and served as a nurse in Springfield, MO.
Hedy and William Dale “DOC” met in Chiropractic School and were married October 2, 1947, in St. Louis, MO. To this union were two children, Laurie and Kerry. She loved playing softball. She enjoyed sewing and fishing with her family. Her children and grandchildren was a highlight of her life.

Hedy was a member of First Church of God of Hugoton. She enjoyed being involved with her church family.
She was a United States Postal Carrier for about 30 years.

A memorial has been established for American Legion Aux. of Liberal. Memorials may be mailed to Robson Funeral Home, P.O. Box 236, Hugoton, KS 67951.

Funeral Service will be Monday, December 9, 2019, 11:00 AM at First Church of God, Hugoton, KS. Burial to follow at Hugoton Cemetery, Hugoton, KS.

Robson Funeral Home, Hugoton is in charge of arrangements.
To order memorial trees or send flowers to the family in memory of Hedwig Theresa "Hedy" Lairmore (Jancunski), please visit our flower store.