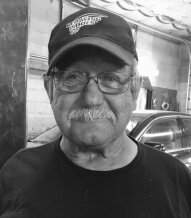 Herman Mack Stroud, 65, passed away Monday, November 9, 2020, at his residence in Elkhart, Kansas.

Herman married Christina Walsh and to this union was one son, Bobby. They later divorced. He then married Bridgett, she preceded him in death.

Herman loved his family, especially his grandchildren. In his early life he enjoyed fishing and camping in the mountains. He always had a great sense of humor and enjoyed life to the fullest.

A memorial has been established for the family. Make checks payable to Bobby Stroud to help with final expenses. Memorials may be mailed to Robson Funeral Home, P.O. Box 606, Elkhart, Kansas 67950.

Robson Funeral Home, Elkhart is in charge of arrangements.
To order memorial trees or send flowers to the family in memory of Herman Stroud, please visit our flower store.