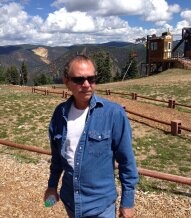 Doug was born to Eldon “Tub” and Shirley (Davis) May on April 13, 1964 in Hugoton, KS. Doug was a lifetime resident of Moscow, KS.

He and Sherri Brown were married January 14, 2008 in Las Vegas, NV. They loved to travel together to Las Vegas and into the mountains and their favorite place was Red River, NM.

Doug was a very proud farmer that is what he loved to do. He was an air pilot and loved to fly around the country side.

He was preceded in death by his father, Eldon “Tub” and sister, Shari.

A memorial has been established for Pheasant Heaven Charities and/or St. Catharine’s Hospice. Memorials may be mailed to Robson Funeral Home, P.O. Box 236, Hugoton, KS 67951.

Graveside service will be Wednesday, May 22, 2019 at 10 AM at Moscow Cemetery, Moscow, KS with Pastor Patty Lahey presiding. The family has extended an invitation to friends and family at the United Methodist Church, Moscow, KS following the Graveside service.

To order memorial trees or send flowers to the family in memory of James Douglas "Doug" May, please visit our flower store.