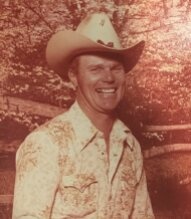 James was born in Paonia, Colorado to James and Veda (Riley) Sagebiel on July 9, 1939.

He married Vivian Joyce Pate June 4, 1958, in Elkhart. Vivian preceded him in death on July 11, 2012. To this union were three children: Dennis, Dale, and David.

His hobbies included anything to do with ranching, farming, or rodeos. Jim enjoyed cattle trading and going to cattle sales. When his children were younger, he and wife Vivian Joyce enjoyed hauling the boys to rodeos. In the last couple of years, he enjoyed spending time with girlfriend Joyce and dancing on the weekends.

He was preceded in death by his parents James and Veda and wife Vivian.

A memorial has been established for Morton County Fair and Rodeo. Memorials may be mailed to Robson Funeral Home, P.O. Box 606, Elkhart, Kansas.

Robson Funeral Home, Elkhart is in charge of arrangements.
To order memorial trees or send flowers to the family in memory of James William "Jim" Sagebiel, please visit our flower store.