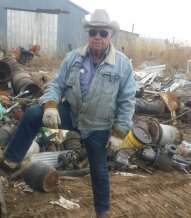 He was born to William Thomas "Bud" and Florence (Gooch) French on April 17, 1941, in Stevens County, Kansas.

Jim later married Gaye Celeste Ward on April 11, 2012 in Clayton, New Mexico. He and Gaye enjoyed working and spending time together. They worked in their crushing car business. They were best friends and enjoyed their years spent together.

He was very active and enjoyed being busy. Jim loved junking cars and taking them to be crushed, he actually made this his business. He enjoyed hunting birds, gardening, and anything old country music. Jim was always there to lend a helping hand to others. He was a Christian man and was baptized when he was 14 years old.

A memorial has been established for Pheasant Heaven Charities, in care of Robson Funeral Home, P.O. Box 236, Hugoton, Kansas 67951.

Robson Funeral Home, Hugoton is in charge of arrangements.
To order memorial trees or send flowers to the family in memory of Jimmie Thaine "Jim" French, please visit our flower store.