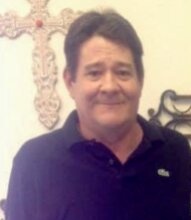 He graduated from Hugoton High School. In school he was a gifted athlete in all sports including baseball, track, football, basketball. He later enjoyed coaching his kids in sports and teaching them about the sport.

He enjoyed fishing and racing a stock race car for many years. Of all things he loved the Oklahoma University Sooners and the Kansas City Chiefs.

A memorial has been established for the St. Stephens Episcopal Church in Guymon. In the care of Robson Funeral Home, P.O. Box 236, Hugoton, Kansas 67951.

Graveside service will be held Monday, May 2, 2022, at 10 AM, at Hugoton Cemetery, Hugoton, Kansas. A memorial service to follow at 4 PM at St. Stephens Episcopal Church, 1803 N. Leila, in Guymon, Oklahoma.

Robson Funeral Home, Hugoton is overseeing the arrangements.
To order memorial trees or send flowers to the family in memory of John Allen Akers Jr., please visit our flower store.