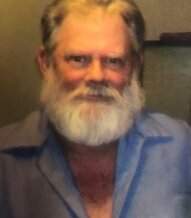 Jon Alan Rowden, 63, passed away on Saturday, February 9, 2019 at his residence.
Jon was born to John Emery and Geraldine (Moser) Rowden on January 27, 1956 in Hugoton, Kansas. He graduated from Hugoton High School. He was a lifetime resident of Stevens County, Kansas.
Jon was backhoe operator and truck driver for Passmore Brothers for about 30 years.
He loved to build wooden ships.
Jon survivors includes a companion, Jessica Meek, Hugoton, KS.; a son, Jeremy Rowden, Hagerstown, MD.; a daughter, Misty Rowden, Cherokee, OK.; mother, Geraldine “Gerry” Rowden; a brother, Guy Rowden, both of Hugoton and grandchildren and other relatives and friends.
He was preceded in death by his father.
The memorial has been established for Pheasant Heaven Charities, Hugoton. Memorials may be mailed to Robson Funeral Home-P.O. Box 236-Hugoton, KS. 67951.
Graveside Service will be held on Monday, February 18, 2019 at 2 PM at Hugoton Cemetery, Hugoton, KS with Pastor Gary Stafford.
Friends may call Thursday and Friday from 10 AM to 8 PM at Robson Funeral Home, Hugoton.
To order memorial trees or send flowers to the family in memory of Jon Alan Rowden, please visit our flower store.