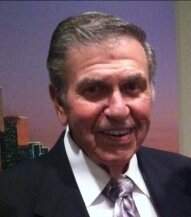 Jon was born on September 15, 1935 in San Antonio, Texas to John and Dorothy (Faverty) Stutz. Jon lived in San Antonio most of his childhood life and later moved to Hugoton, KS where he graduated from Hugoton High School.

Jon met the love of his life, Janet L. Bryan and they were married January 7, 1961. To this union were 2 children, Gary Parker Stutz and Jeana Stutz Wing. He worked and managed Parker Grain Company for many years. Later he started a lawn service business. Where many of his grandchildren and great grandchildren worked alongside of him. He loved his family and cherished the times they spent time together showing horses as well as family vacation times in Cuchara, Colorado.

A memorial has been established for the United Methodist Church, Pheasant Heaven Charities and Peace House Ministries all of Hugoton, KS. Memorials may be mailed to Robson Funeral Home, PO Box 236, Hugoton, KS 67951.

Funeral service will be held on Thursday, July 9, 2020, at 10 AM at the United Methodist Church, Hugoton, Kansas with Pastor Wesley Young and Carol Swinney presiding and burial following at Hugoton Cemetery, Hugoton, Kansas.

Viewing will be Wednesday, July 8, 2020, from 10 AM to 8 PM at Robson Funeral Home, Hugoton. The family will be receiving friends on Wednesday from 6 PM to 8 PM at the funeral home.

To order memorial trees or send flowers to the family in memory of Jon Allison Stutz, please visit our flower store.

The family will receive friends from 6 PM to 8 PM at the Robson Funeral Home.