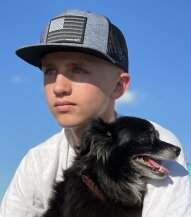 Joe was an Elkhart High School Wildcat Senior, class of 2022. Joe was an avid sports player, especially baseball. He had an extensive work ethic, and he thoroughly enjoyed farming and being on the tractor. In his free time, Joe liked hunting, welding, and anything Donald Trump. He was also a talented artist.

As an avid sports player, he had many accomplishments. He was on the Regional High School Championship football team in 2018 and the baseball State Championship in 2019. He was also awarded 1st Team All-League in baseball in 2021. In the recent months, he began to show interest in powerlifting. He competed at the 1-2A State Powerlifting in Conway Springs, Kansas where he placed 2nd in bench press, 3rd in squat, and was the State Champion in Cleans and Reserve State Champion Overall.

Joe was preceded in death by his Papa Joe and Grandma Lou Whisennand.

Robson Funeral Home, Elkhart is in charge of arrangements.
To order memorial trees or send flowers to the family in memory of Joseph Wayde "Joe" Whisennand, please visit our flower store.