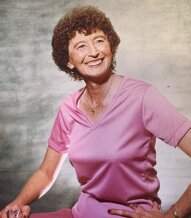 She was the daughter of Benjamin David and Beatrice Angeline (Bledsoe) Kirk. She was born July 15, 1935, in Guymon, Oklahoma.

She was preceded in death by her parents and husband.

A memorial has been established for American Cancer Society. Memorials may be mailed to Robson Funeral Home, P.O. Box 606, Elkhart, Kansas 67950.