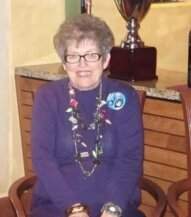 Judith R. Rooney, 86, died June 18, 2020, in Satanta District Hospital, Satanta, Kansas. She was born February 23, 1934 in Norton, Kansas, the daughter of William Walter Rouse and Winifred Maureen (Corley) Rouse. Judy graduated from Fort Hays State University, Class of 1956. She married Archie Franklin Rooney on March 30, 1956. Following graduation, they settled in a house on the family farm that was won in a poker game. Archie and Judy were married for 51 years before he passed in July 2007.

If you’ve enjoyed bulletin boards, signs and buttons around Satanta, Judy probably created or designed them. Satanta Day was a busy time for her as she decorated bikes, cars and floats for the parade. Her Kids and Grandkids remember her helping design and decorating Proms, Homecoming backdrops, lockers and bulletin boards at the Grade School and High School. Various clubs around Satanta enjoyed her themed table decorations. She painted the Indian on the High School old gymnasium floor. She designed the tile entryway to the High School concession area and the City water tower Indian. Judy also designed the badge for the Tumbleweed Girl Scout Council of Kansas.

Judy was a behind the scenes person but we all new who the creator was due to her unique style that everyone recognized. Many of you can picture Grandma Judy in her Satanta Indian’s Sweatshirt coming into the ballgame with her bag of suckers.

In lieu of flowers a memorial has been established for Satanta District Hospital. Memorials may be mailed to Robson Funeral Home, P.O. 747, Satanta, Kansas 67870.

Visitation will be held June 21, 2020, 2 PM to 8 PM with family receiving friends from 6 PM to 8 PM.
A private family funeral service will be held, and burial will be held at Dudley Township Cemetery, Satanta, Kansas.

To order memorial trees or send flowers to the family in memory of Judith R. Rooney (Rouse), please visit our flower store.